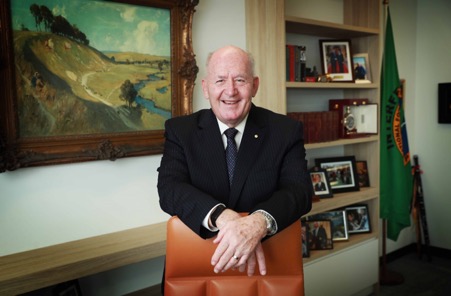 Rotary Adelaide Invites you to join us on line, to hear...

Sharing his thoughts on Leadership in Challenging Times...

Sir Peter has kindly accepted an invitation to speak to Group 1 Clubs and all Rotarians, at our Zoom Meeting at 12.55 for 1pm until 2pm.

Please go HERE to register for this meeting and to get log in details.

Sir Peter has been described by many as a “good bloke”; warm, open, honest, forthright, energetic, loyal, are amongst the many words used to describe him. He continues to be a leader in our community.

"'Paying it forward'. In many ways that is a succinct expression of the major obligation of our existence. Doing things now for the protection and upliftment of relatively helpless future generations, which either don't exist yet or are presently too young to take action themselves. Australians don't have this obligation uniquely - every society on earth shares it equally. But in this country, we have opportunities not widely available. We not only have an abundance of brilliant people with great energy and inventiveness, we are comparatively rich and thus can do what others might only dream of."

Similar to the ideals of Rotarians!

So please join us to hear from this eminent Australian Leader.

Born into an Army family, Peter Cosgrove attended Waverley College in Sydney before graduating from the Royal Military College Duntroon in 1968. His first deployment was in Malaysia with the 1st Battalion RAR and later in Vietnam he commanded an infantry platoon. He served as Commander of INTERFET in East Timor in 1999 overseeing that country’s transition to independence. Then promoted to Chief of Army and later Chief of the Australian Defence Force.  He retired from the ADF in 2005 serving on several boards before becoming a Knight in the Order of Australia when sworn in as Governor-General in 2014 and serving until June 2019.   Sir Peter was appointed a Commander of the Royal Victorian Order by Her Majesty the Queen in August 2019.

In retirement, he remains involved with defence, health and other charitable organisations.  In January 2020 Sir Peter accepted the voluntary role as chairman of the Business Council of Australia’s Community Rebuilding Initiative in response to the 2019/20 bushfires, leading a group of eminent business and community leaders to work with government and the community in the rebuilding process.

Sir Peter is also an avid sports fan with a particular interest in Rugby and Cricket.  Married to Lynne since 1976, they have three sons and delight in their three young grandchildren!

Additional information about some of Sir Peter’s awards and honours:-

Member in the Military Division of the Order of Australia (AM) for service in command 1983-84.

Australian of the Year in 2001

Knight in the Order of Australia in 2014

Commander of the Royal Victorian Order, appointed by Her Majesty the Queen in August 2019.

If you have any guests coming online please let us know with an email to This email address is being protected from spambots. You need JavaScript enabled to view it.

Some hints are in the handy “etiquette”document.

See you online at 1pm.