$32 if you book on our website - Welcome Desk price is $35. Includes Main Course, shared Cheese platter and Tea/Coffee, good company, great speaker and all done by 2pm!

Please book on our website by Monday September 5 10am to secure your place! Welcome Desk payment by Card only! 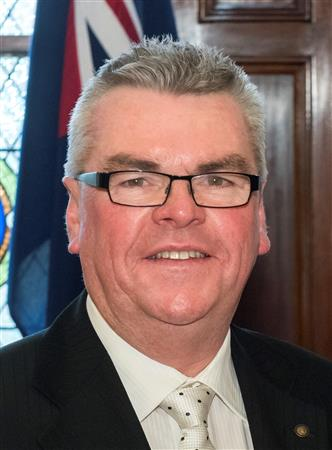 Update on the district

The Rotary Club of Ashikaga East, Japan, awarded Paul a Paul Harris Fellow in 1995 in recognition of his ongoing commitment to Rotary. The Rotary Club of Northern Yorke Peninsula awarded a Sapphire Pin in 2019. Paul is married to Kathryn, and they have lived overlooking the waters of Wallaroo Bay since building their home and marrying in 1988. Paul always acknowledges Kathyn’s support.

Local Government has dominated almost half of Paul’s life. He is the former Mayor of the Copper Coast Council and was made a Member of the Order of Australia in the 2017 Queen’s Birthday Honours for his significant service to local government, the Northern Yorke Peninsula community, tourism and cultural events. After 28 years, Paul retired from local government in November 2018.

During Paul’s time in public service, he was a delegate to committees including the Farm Shed and Tourism Centre, Yorke Peninsula Tourism and Regional Development. He also chaired the Northern Yorke Peninsula Private Hospital Board and the Northern Yorke Peninsula Health Service Board. Paul was part of the organising committee for the Kernewek Lowender Cornish Festival for approximately 33 years, including serviing as its President from 1997-2013. Paul was named a Bard of the Cornish Gorsedd in recognition of services to Cornwall.